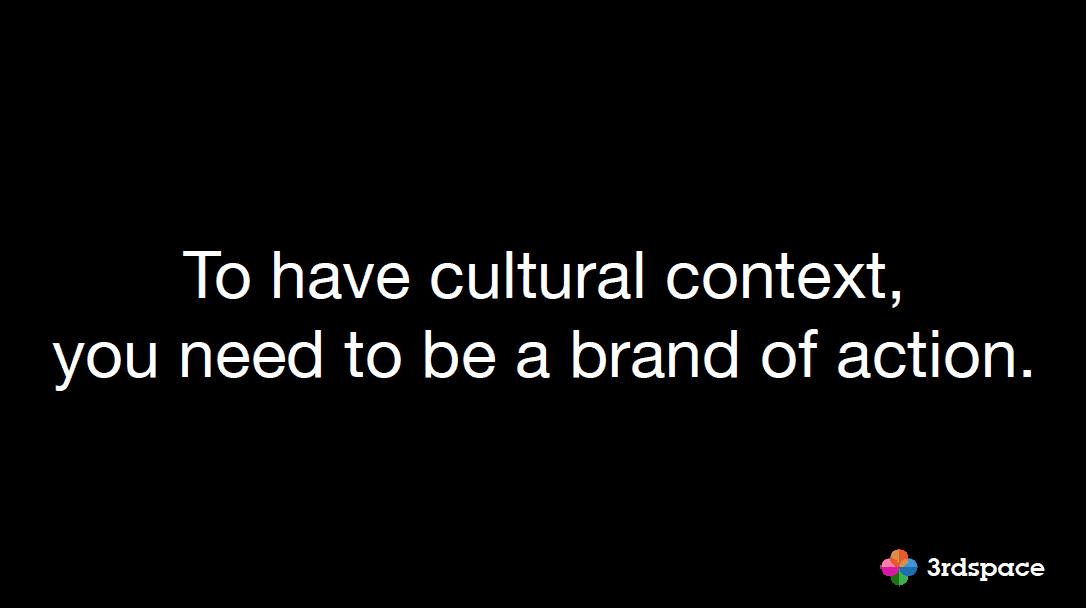 Posted at 08:00h in Uncategorized by 3rdspace
0 Likes

The US race riots following George Floyd’s death in Minneapolis have spilled over into the national conversation in Australia. We’re seeing television debates, Black Lives Matter protests and social media battles challenging racial injustice locally. So – which brands will be brave enough to reflect cultural context and address race issues in their content marketing?

As marketers, we’re told we need to be sensitive to the cultural context that our brands exist in, so that we can communicate in a way that’s relevant to how our audience is thinking and feeling and have more meaningful conversations with our customers.

To that end, maybe we should start by watching actor Meyne Wyatt’s two-minute monologue on the ABC’s Q&A program, about systematic racism and discrimination against Australia’s Indigenous population. It’s been described as the “best two minutes of Australian TV ever” and shared on every news outlet from The Guardian to 9 News and news.com.au.

Meyne’s words kicked it out of the park with not only a powerful message but a tone that is truly Australian: no beating about the bush, no sensitive empathy, just in-your-face honesty.

Then there are the tens of thousands of Australian protestors who defied state governments’ COVID-19 rules and the advice of medical officers, taking to the streets and demanding an end to black deaths in custody and other racial injustices.

And the thousands of Australians who blacked out their social media profile pictures for Black Out Tuesday, engaging in debate about #BlackLivesMatter versus #AllLivesMatter, bringing the conversation squarely into people’s social media feeds.

What does all of this tell us? We can see that diversity, authenticity and fairness are valued by increasing numbers of consumers, and content that ticks these boxes may well resonate with them.

The brand response so far

Many brands have showed support for the movement; not all have done well out of it.

In the US, Ben & Jerry’s has been one of the most militant mainstream brands to tackle the issue. The ice-cream brand has been spreading their values of social, economic and environmental justice and equality for decades, so when they published a blog titled ‘Silence is NOT an Option’ detailing a four-step plan towards anti-racism in the US, using a graphic that read “Dismantle White Supremacy”, they were actually praised by activists.

Two tea brands in the UK – Yorkshire Tea and PG Tips called out a racist on their Instagram page and told them to find another brand of tea. Their audience loved them for it, embracing #solidaritea.

In Australia, skincare brand Aesop told its Instagram audience it would donate US$100,000 to organisations that fight racial injustice and promote opportunities for black people, and was well received.

In contrast, Zimmermann copped flak for its message of support for the Black Lives Matter movement after people commented on the lack of diversity in Zimmerman’s marketing campaigns and its racist brand guidelines.

In the US, L’Oreal suffered a similar fate when it published the message ‘SPEAKING OUT IS WORTH IT’ on Instagram. A former L’Oreal ambassador, trans-model Munroe Bergdorf who had been sacked because her views were “at odds” with their values, called L’Oreal “racist snakes” and the story quickly went crazy online.

Walk the walk, not just talk the talk

If you think you can cynically tap into public sentiment and support popular causes, beware: if your own beliefs and behaviours don’t match what you’re preaching, there will be a backlash. You need to be true to your organisation’s values.

And you need to back it up with action. Which includes protesting, sure, but it could also be celebrating and creating positive opportunities for Indigenous kids, from outback Australia to Redfern. For my money, that action would include getting behind Adam Goodes’ and Michael O’Louglin’s charity The Go Foundation.

So yes, we need to be plugged in to what is happening in society when creating content, and communicate in the channels our audience prefers to engage on. But who’s brave enough to not only support but crusade this moment with content that provokes action? If you really want to reflect cultural context, ACT NOW.

As Meyne Wyatt says in his monologue, “Never trade your authenticity for approval. Be crazy. Take a risk. Be different. Offend your family. Call them out. Silence is violence. Complacency is complicity.”