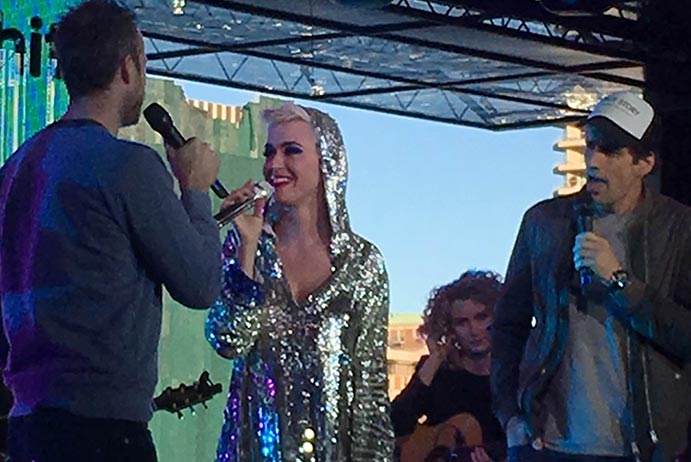 Posted at 11:42h in Blog, Miscellaneous by 3rdspace
0 Likes

On Friday, team 3rdspace were lucky enough to get up close at a private gig with none other than the California Girl herself, KATY PERRY!

Earlier in the year, Southern Cross Austero (SCA) had asked us to come up for a couple of concepts and potential locations for a unique Katy Perry gig, so her trip to Australia was met with much anticipation. Sourcing innovative locations definitely brought a smile to the teams faces, but the potential of actually going to a Katy gig hadn’t really entered our minds. The thought of getting so up close and personal to this superstar, advocate and all round awesome female artist was beyond exciting… and on Friday 30 June, it all became a reality.

Thanks to our friends at SCA, 3rdspace were part of a select bunch of lucky Sydney siders that spent Friday afternoon at an intimate gig where Katy belt out new and old favourites like ‘Chained to the Rhythym’ and ‘Firework’ to a crowd of around 400 people at Sydney’s Overseas Passenger Terminal. What a way to end the week!

How the senior 3rdspace team managed to keep this quiet from the team is quite a feat, we have some die-hard Katy fans here at 3rdspace HQ, who up until 15 minutes before had ZERO clue of what was about to happen. Excitement would be an understatement. Here’s a glimpse into what it meant to our Creative Coordinator Emily, for a taste of how it all played out!

We arrived at the terminal and pretty quickly we realised what was about go down, when I saw hundreds of Katy Perry fans lining up waiting for an afternoon of Katy’s latest jams. The iconic Hamish and Andy introduced Katy to the fans on Sydney harbour and team 3rdspace scored a place in the crowd only metres away. It was… epic!

Our verdict: Katy is truly a talented and vivacious female, and this once in a lifetime experience is something we will never forget. What a way to end the week!

Thanks to our good friends at SCA for making it happen, and we’re wishing Katy all the best as she promotes her new album and Australian Tour for 2017.